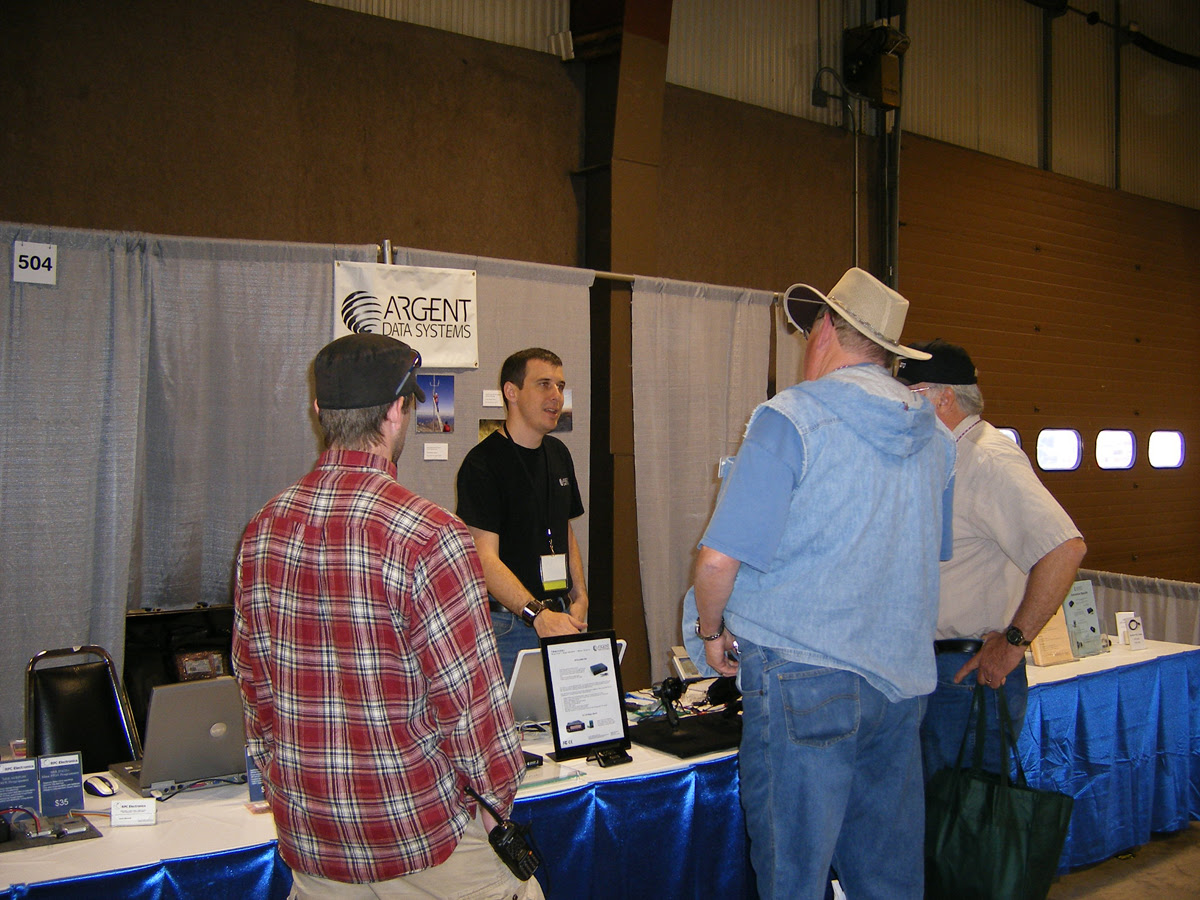 Hamvention 2008 is done! Dayton is my most stressful annual trip by a wide margin. This year went fairly smoothly, and I think the display was the best we've had yet. Jason did a great job putting together the nüvi / T2-135 display and it drew a decent size crowd.

I was definitely more busy this year than last - I got out of the booth a couple of times on Friday and managed to see at least some of the other exhibits, at least in passing, and even had time to eat a cold hot dog over the course of about an hour. Saturday was a little more hectic, and I don't recall even getting a bathroom break for about eight hours, and no food at all. Can't say I really noticed until it was over, though.

Financially I think it was probably a wash, as usual. Between booth space, airfare, hotel, shipping, and so forth it's hard to turn much of a profit at Dayton, but it's worth doing for the exposure.

I'm still about a hundred emails behind thanks to the trip, and I've got a ton of other stuff to get done this weekend. I did finally get a chance to try making a PCB with the MDX-20 today, though. And broke my first tool in the process - not one of the $6 ones, either. It was my sole $48 1/64 inch end mill, of course. I had it cutting just a bit too deep and a bit too fast, and it lasted about 5 or 10 seconds. Did a nice job right up until it snapped, though!

Somehow I wound up with a bunch of 0.062" Garolite G-10/FR4. It's the same stuff the PCB substrate is made of, but colored. I cut some shapes out of one of the black sheets and they look cool, but they seem to be very prone to scratching.

I'll have to pick up some more polycarbonate and play with that. I've only got a 1" thick slab, which is a bit more than I want to start with.

I got the scanner option running the other day, too. We put Charlie's little stone scarab carving in it and generated a model with 0.008" resolution. Took a few hours. I then had it cut a new scarab out of machinable wax. It came out pretty good, but I'm still learning how to properly set up roughing and finishing processes.

I even managed to make a useful production item with the machine. It took me a few tries, but I got it to do the required cutouts in the ABS end panels for the ADS-SR1 repeater. I have a couple hundred aluminum panels already fabricated and paid for, but I should be able to do the next batch in-house. It's amazing how much more mess a small amount of ABS makes, compared to the machinable wax. I think it must be a result of its electrostatic properties. It coats every surface in the machine, while the wax just piles up nicely to be vacuumed away.
Posted by N1VG at 9:56 PM No comments:

I'm totally swamped with Hamvention preparations, but my new Roland MDX-20 CNC milling mchine came in today and I had to try it out. It's been working great, at least since I figured out that one of my serial ports was bad and was causing the machine to try to throw chunks of wood at me.

Right now it's running through one of its sample files - a banana, which it's cutting from machinable wax.

Anyway, back to flyers and price lists and demo hardware!
Posted by N1VG at 8:52 PM 1 comment: