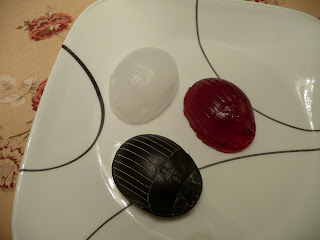 I picked up a vacuum former the other day for under a hundred bucks, figured I'd see if I could put it to use making radomes and such, or at least to prototype packaging. I ordered a bunch of different plastics from McMaster-Carr, and Charlie and I spent the evening molding shapes out HDPE, ABS, PETG, Acrylic, and (unsuccessfully) PVC. Haven't tried the polycarbonate yet. I'll post more of my results later, but shown above is the most functional thing we've come up with so far.

We used Jeff (the same scarab carving that served as a test subject for the MDX-20's piezo scanner, 3-axis milling, and urethane casting) to make a mold in 1/32" FDA-approved HDPE and then mixed up a batch of Jello Jigglers and cast a Jello Jeff. Shown above are the original, vacuum-formed mold, and Jello casting. Jeff's got a bit of an undercut around the base, so de-molding the Jello is tricky. Still, it worked reasonably well.
Posted by N1VG at 9:34 PM No comments: