It's not often that I have such a bad experience with a product or service that I feel like I need to write about it, but I'm downright angry with SugarSync. I set up this service several months ago to keep files (source code, business documents, and reference materials mostly) in sync between my home desktop, office desktop, workbench, and laptop. It seemed to be working OK at first, but things got progressively worse as time went on.

Here's the shared folder where I keep my Quickbooks files:

Keep in mind that I only have Quickbooks installed on one machine, so these files have never been opened or locked on another PC. Yet the files show up like they were edited in multiple places at the same time and the service couldn't resolve the conflict.

Much, much worse is what it did to my source code. I'd work on a project, come back a few days later and edit some more, and then find out that when I'd opened it the second time it had synced an old copy from another PC and I was editing that one. I've had to spend a lot of time with a diff utility trying to merge the changes.

Their support is worthless. All I can get out of the SugarSync people is that it's working as designed and making duplicates of locked files. Yet somehow it also manages to do this with files in my music collection that haven't been edited since 1997. It's also truncated photo files and made them unusable immediately after they were synced.

It looks like I essentially paid $99 to have an application trash my files in insidious ways. Avoid this service. I still need file sync, so I'm going to look into Dropbox or another competitor, but I'm very unhappy with how this turned out.
Posted by N1VG at 12:29 PM 5 comments: 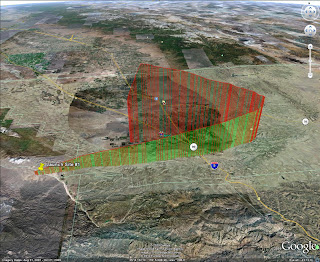 Just got back from a very successful high-altitude balloon launch. The original intent was just to prove some hardware and software modifications prior to a bigger upcoming launch, but at the last minute I decided to fly a camcorder in addition to the tracker payload. I put together a housing for the camera yesterday in about 10 minutes, milling out a chunk of foam on the MDX-20 and taping on a piece of scrap polycarbonate for a window.

The kids and I left home around 6:15 this morning and set up in a field by Cuyama Elementary around 7:30. We had some ground equipment hiccups - my netbook (normally good for 4-5 hours on one charge) was totally dead, for starters. Apparently either the serial adapter or the USB GPS receiver I'd plugged in the night before had kept it from hibernating properly. My TH-D7 also refused to turn on, despite having been on the charger all night.

The nuvi 350 and Tracker2 combination was working just fine, though - the only deficiency being that I hadn't set it up to be able to see the balloon's altitude. The D7 provided that, so long as it was plugged in to the car, so it wasn't a major problem.

Launch was at 7:45 in very light winds. It was immediately clear that the balloon was rising more slowly than planned - I think I miscalculated when setting up my calibration weight. The ascent rate was about 400 feet/minute rather than the planned 1000 feet/minute. This pretty much threw my predictions flight path predictions out the window. We drove out to Mettler anyway and stopped there to see what it would do.

When it looked like the balloon was going to keep heading east at 50+ MPH, I decided to take 138 out to 14 and hope that it'd make it over the mountains. Before I made it to 14, though, the balloon turned completely around and headed west again. We circled all the way up to 58 and were somewhere between Tehachapi and Arvin when the balloon burst. Bill Brown, WB8ELK, called me at about this point to provide his landing prediction.

Rod, WB9KMO, had joined in the chase not long after the launch and was first to the landing area - which turned out to be only a few miles from where we'd stopped in Mettler. We met up with him about a mile from the last APRS fix, and followed that to within 1/4 mile of the landing site. I got about 50 yards from the car before I spotted the foam payload housings and the remains of the balloon in a plowed field.

Everything was intact, and I got about 2 hours of video from the Flip camera. Not enough to capture the burst and impact, unfortunately, and it spins about as much as I'd expected, but for a 10-minute job I can't really complain.

The maximum altitude reached was 113,876 feet - not too bad for an 800-gram balloon. Payload weight was about 350 grams, most of which was the camera. The lowest recorded internal temperature was -19 Celsius, and the lowest pressure was 381 Pascals. Total flight duration was about 3 hours 20 minutes.

This whole thing involved rather more driving than I was expecting, but I'm very satisfied with the results. The updated tracker firmware performed flawlessly, the GPS receiver worked as expected at high altitude, it withstood very cold temperatures over a much longer than expected flight, and the lighter, less tangle-prone 16" rubber duck antenna proved to be more than adequate, even at 500 mW. 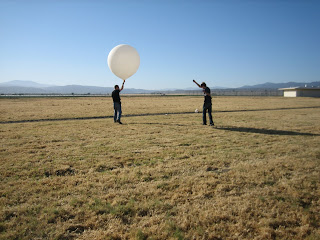 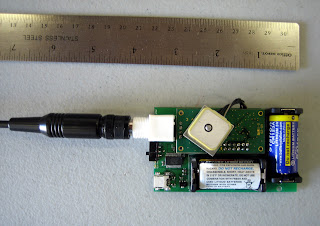 Just launched a new balloon payload this morning. As I write, it's headed for Point Arguello at 16,000 feet. More info here later. Above is what the payload looked like the other day during testing.

The payload is a custom board with an OpenTracker+ RT series tracker, temperature and barometric pressure sensor, SRB MX146LV transmitter, two CR123A batteries, a USB interface for configuration, and a Prolific GPS receiver (not the one pictured here). It's all sealed in 2" heat shrink tubing. The temperature just reached 1C, hopefully it'll stay warm enough.
Posted by N1VG at 10:39 AM 1 comment: