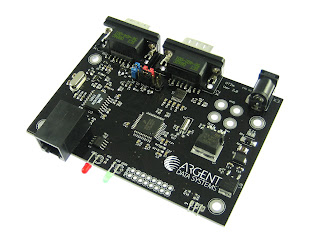 Pictured above is the first hand-assembled OT2m prototype with the new version 2.0 PCB. It's working well, but I think I'm going to make one or two small tweaks before it enters production.

The most obvious difference between version 2.0 and version 1.0 is that the demodulator is a CML Micro MX614 instead of the NJM2211 from NJR. Getting consistently good performance from the 2211 has been a pain. The switch to the MX614 is going to mean a cost increase of at least a few bucks, but I think it'll be worth it for the improved RX performance and decreased testing and tuning burden.

Less obvious is the addition of ESD suppressors on all external connections. I have yet to attack it with my ESD zapper, but it should be considerably more resistant to static discharge than the previous version. I won't guarantee that it'll survive a nuclear EMP, but it should tolerate some rough handling. The ESD suppressors also introduce some capacitance that should help improve RFI immunity, though that's never really been a problem with the 1.0 board and its existing inductive filtering.

The power supply section's be rearranged a bit and has proper reverse-bias protection now, that also protects the VN920 solid state relay - correcting an oversight in the last version that resulted in a couple of accidental magic smoke releases. D11 is undersized in this picture because I forgot to order the proper part.

The solder jumper SJ1 is there to bypass the reverse bias protection. This is in case you want to power the unit through the high-current pads and still want the supply voltage measurement to work.

What you can't see under that pretty black solder mask is that the board routing has been completely redone, mostly by hand. Eagle PCB's new follow-me router makes it much easier to lay out traces manually and resulted in a better arrangement of components, especially in the sensitive audio input section. The most critical traces are 14 mils wide there (version 1.0 was mostly 8 mil traces) and only a few of the shorter traces are under 10 mils anywhere.

This batch of boards was also made with twice as much copper - 2 oz per square foot, versus 1 oz for the version 1.0 production boards. This means more power handling capability in the solid state relay section in particular. The prototypes were done with a lead-free HASL finish, but I've had the production boards quoted with electroless nickel / immersion gold like the OT1+ boards.

The only other real change in this version is that the (never used) FRAM expansion has been removed, and those four I/O lines have been rerouted to the MON08 header at the front of the board. This should make it easier to wire up a keypad to go with an LCD display if I can ever find the time to finish the coding for the user interface.

Absolutely no firmware changes are required for the new board. Transmit audio is still generated by the processor, not the modem IC so it's still capable of 300 baud or PSK31 output. There's also some extra filtering on the audio output.

Decode performance is quite satisfactory. With the WA8LMF Track 2 test, it decodes 987 packets. The best I've heard reported for any other TNC is 970 for the uTNT. My KPC-3 scored 967. The highest ever recorded, to my knowledge, was 991 for an early Tracker2 connected to the output of the same KPC-3's TCM3105 chip. I'd have considered the TCM3105 for the new T2 board, but they've been discontinued for years.

It looks like the OT2m is going to be out of stock for a little while. The existing stock is enough for maybe two weeks at this rate, and it's going to take at least twice that long to finish testing the new board, make some minor tweaks, source all of the new parts, and get production started - which means new pick and place programming and a new solder stencil. I think six to eight weeks is more realistic.

I'm also going to have to have more enclosures produced, which doesn't usually take that long, but I've been a little unhappy with the consistency of the last batch or two from my current supplier. I've got a small pile of case pieces that just won't fit with the others. It wastes parts, and wastes time when you get an out-of-spec cover or end panel and have to disassemble it again.

Great work Scott... Can't wait for an excuse to put a few of these into service!

Looks promising! I hooked up a display to my OT2m last month. It sort of worked, but my display isn't supported exactly, there were some charset issues, and the display was reversed (blue-on-white instead of white-on-blue). I was going to backport the support from the hamdr code base (C, several different displays supported), but it turned out that the OT2 code doesn't compile with the free IDE.

Componentbuy is one of the fastest growing distributors of Semiconductors and electronic Components in the world.

Supports more than 20 Millions of Electronic components sourcing needs with Engineering Data support. Locating all your required components for your design and production needs.

Our website will act as tool for the sourcing and Design engineers on the components needs.

Scheduled orders will be accepted which in turn reduce yours warehouse management activities.


Alerts and notification
Upload the BOM under the BOM upload we will notify you the information on product changes and cross-reference products.

Get subscribed to our newsletter or the product notification and receive an alerts on the Product change notifications, Datasheets and lifecycle updates on the products.


What can we do for you ?
Our Engineers and Sales professionals helps customers to get their jobs done and get their products to market quickly and efficiently.
componentbuy.com